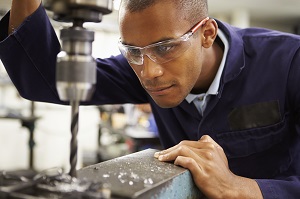 July U.S. cutting tool consumption totaled $170.95 million according to the U.S. Cutting Tool Institute (USCTI) and AMT – The Association For Manufacturing Technology. This total, as reported by companies participating in the Cutting Tool Market Report (CTMR) collaboration, was down 8.4 percent from June’s $186.57 million and up 16.0 percent when compared with the total of $147.43 million reported for July 2016. With a year-to-date total of $1.266 billion, 2017 is up 7.1 percent when compared with 2016.

“The cutting tool industry certainly is on a pace to exceed 2016 totals,” says Brad Lawton, Chairman of AMT’s Cutting Tool Product Group. “With the continuation of strong domestic economic growth, there is a potential recovery to the industry levels of 2015.”

“Cutting tool demand continues its moderate recovery though the monthly data remains volatile,” said Eli Lustgarten, Senior Vice President at Longbow Securities. “While July 2017 consumption showed a seasonal decline of 8.4 percent from June, results were 16 percent above the comparable month a year ago.  Year to date consumption is up 7.1 percent and appears to be mostly demand driven with some modest restocking helped by the current moderate improvement in both on and off-highway markets, including a recovery in the mining and oil and gas sectors. We expect cutting tool demand to continue its current moderate recovery for the remainder of 2017, despite somewhat tougher monthly comparisons and the ongoing modest recovery in manufacturing industrial production, which isup 1.2 percent year to date.”