Walk into most any machine shop and there’s a good chance you’ll hear it: the high pitch whine of a deep boring operation, the chatter loud enough to have even the hardest of hearing among us scrambling for a pair of ear plugs. It’s a problem that has plagued machinists since the day lathe inventor Henry Maudslay first chucked up a piece of steel and tried to bore a hole through it and has only gotten worse as metals have grown tougher and more challenging to machine.

Not anymore. Kennametal’s latest weapon in the war on chatter is one that will have machinists everywhere saying, “I need that.” The new boring system boasts the most effective anti-chatter mechanism ever developed by Kennametal, and also offers an extensive range of indexable heads and shank sizes. 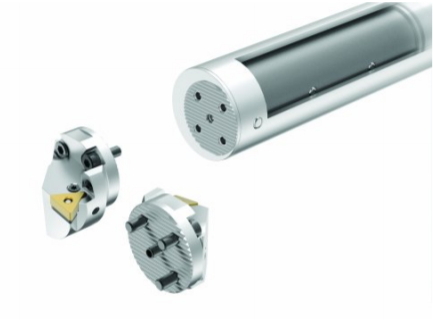 Someone who knows all about it is Sam Eichelberger, product engineer for lathe systems engineering and part of the team that developed the internal dampening mechanism. “Perhaps the most important thing to know about the new bar is that it’s plug and play,” he says. “There's no need whatsoever for tuning or adjustments—you simply pull it out of the package, mount it in the turret, and get boring.”

There’s more to the story than making the shop a quieter place to work, however. Eliminating vibration and therefore chatter greatly extends tool life, never mind its positive effect on part surface finish. And when tools last longer, they can be pushed harder, with feed rates, cutting speeds, and depths of cut many industry experts once thought unachievable.

Eichelberger is one of them. He lists a number of features that not only make the vibration-free boring system the most easy-to-apply bar you’ll ever bore with, but also the most productive. These include a serrated, bolt-on connection at the bar’s business end that securely clamps a variety of styles and sizes of indexable heads.

Better yet, the heads themselves have been put on a diet, with a shorter length and lighter weight that provides greater stability, contributing to the bar’s improved performance. They’re also coolant-fed, to precisely direct a stream of high-pressure coolant where it’s needed most. The result is hassle-free chip control together with maximum cooling in the cutting zone.

Most important of all is the internal dampener. Said Eichelberger, “The bars are both vibration and maintenance free. Within the bar there sits a mass that's supported by a pair of elastic supports, inside of which sits a dampening fluid. This mass vibrates at a predetermined frequency during machining, attenuating the natural frequency of the bar around it to suppress vibration. There are no wear components to worry about, nor tuning—as Sam mentioned, you just set it and forget it.” 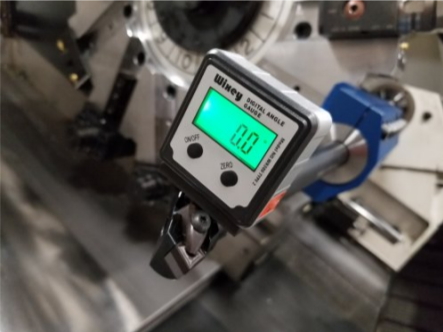 The vibration-free system offers superior performance in boring applications up to 10X diameter deep, Eichelberger explained, much deeper than solid carbide or heavy metal boring bars are capable of. Internal and customer test results show surface finishes as good or in most cases better than competitive “quiet bars,” with significantly more aggressive cutting parameters possible across the board.

Of course, boring bars are only as good as the method by which they’re clamped in the machine. Kennametal has addressed this critical consideration by supplying machine-specific turret adapters, along with a special split sleeve bushing for maximum rigidity. “That’s the goal of this product,” says Kennametal global product manager John Gable. “The greatest stability possible and the most effective dampening solution available, period.”

Anyone who’s ever struggled to get a boring bar exactly on center will appreciate the fact that setup is extremely easy. “There’s a reference flat on the top of the head that accommodates a visual angle finder,” Eichelberger pointed out. “You just rotate the bar until the indicator reads zero, then clamp it in place.”

Considering the higher cost of a such a boring system, they’ll also appreciate the fact that the heads are replaceable in the event of a crash, avoiding damage to the bar itself. And users of Kennametal’s older boring system will find that their new heads fit perfectly with the use of an adaptor.

“The portfolio for our Imperial bars ranges from one-inch in diameter up to four inches, while the metric version starts at 25 mm and goes to 100 mm,” Gable said. “There are a variety of interchangeable head styles available as well, everything from screw-on positive rake inserts for fine-finishing needs to negative rake, clamp-style geometries for heavy roughing. The bar’s designed to excel in demanding applications, and that’s exactly what it does.”

Photo 2: Setting the head exactly on centerline is as easy as bringing the angle finder display to zero and locking the bar in place.