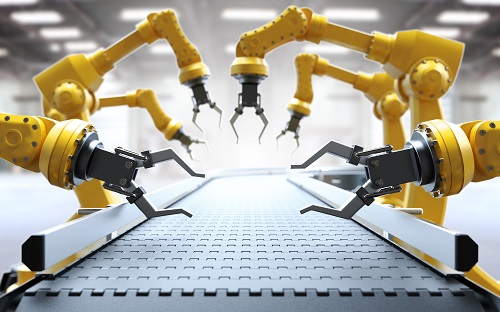 Here are five machine safeguarding trends that will be strategic for fabricators and manufacturers in 2018. Each has the potential to significantly impact or even disrupt entrenched processes and may poise the need for investment by manufacturers that face the risk of being non-compliant with newer OSHA/ANSI codes, or being too late to adopt productivity-enhancing equipment.

1. Robots and Cobots on the Move

Manufacturers will significantly accelerate their use of robots and cobots in U.S. factories over the next decade as they become cheaper and perform more tasks. According to the Robotic Industries Association, the North American robotics market broke records for orders and shipments in 2017. As robots and cobots continue to find homes in shops of all types and sizes, companies need to ensure these pieces of equipment are integrated properly and that they are adequately safeguarded per ANSI/RIA R15.06-2012. For robots, incorporating a combination of safeguarding equipment, such as perimeter guards, light curtains, pressure-sensitive safety mats, and laser scanners, is an essential piece of the puzzle, but it's not the be-all and end-all in safe operation.

According to the Occupational Health and Safety Administration (OSHA), many robot accidents occur during nonroutine operating conditions, such as maintenance, programming, setup, or adjustments. More often than not, these accidents, which can result in injury or death, are preventable. Safeguarding equipment is not a one-size-fits-all solution. The best way to safeguard your robot is to observe the machine while it operates, evaluate all the variables around it, and then use that feedback to design a system unique to that robotic cell. Some fabricators opt to have their robots safeguarded before they arrive on the shop floor. That's a great idea in theory, but there are risks. Collaborative robot systems or "cobots" are opening up a new frontier in manufacturing and fabricating applications. Appropriately, their use is being reflected in safety standards.

RIA TR R15.606-2016 - Collaborative Robot Safety ("TR 606") permits a cobot system and operator to share the same work area simultaneously without the burdensome use of safety fencing. Because cobots are affordable, highly adaptable, and almost plug-and-play, manufacturers are eager to integrate this technology into their processes.

Press brakes are an unforgiving piece of machinery, and a frequent cause of workplace amputations of hands and fingers. United States Department of Labor statistics indicate an average of 368 instances of amputations annually from press brake accidents. There are several press brake safety options, ranging from barrier guards and pull-backs, to light curtains and two-hand down/foot devices. The newest entry into the press brake safety category is probably its most revolutionary: The Laser Active Optic Protective Device, more commonly referred to as the AOPD. Invented in 1998 as an alternative to light curtains, these systems were first used in the European Union before coming to the U.S. in 2003 as a retrofit solution. Laser AOPDs allow the operator to work within very close proximity (15mm) of the point of hazard. This significantly improves the productivity of the press brake by increasing cycle time and reducing operator injuries and fatigue. AODP is best suited for applications such as box bending, bending with flanges or where light curtain effectiveness is diminished due to excessive blanking or muting. The recent inclusion of Laser AOPD technology in the B11.3 is a welcome addition to the standard that now gives press brake manufacturers, dealers and users a clear guideline to implementing this technology safely.

3. Putting the World on Guard

Rapid industrialization across the world, particularly in developing regions, is propelling the demand for machine safeguarding. Developing economies in China and India are increasingly adopting modern machine safeguarding techniques. More sophisticated management, new stringent regulations, and the presence of various multinational companies in these countries is increasing emphasis on the use of safeguarding systems to align with business goals. Despite the overall economic slowdown in China, for example, the machine safeguarding market continues to perform well in this region.

Once you know its intricacies, it is understandable why LOTO, as outlined in OSHA standard 29 CFR 1910.147 "The Control of Hazardous Energy (Lockout/Tagout), has become an everyday struggle for many safety personnel. It can be very time-intensive, often requiring longer than is required to finish the actual maintenance task on the machine. Production comes to a halt, resulting in the day's production numbers potentially being missed. This becomes even more frustrating when the maintenance task is one that must be implemented several times a day. Loss of time and profits create a strong incentive to bypass LOTO to carry out repetitive machine tasks.

Thankfully, OSHA 29 CFR 1910.147 also outlines "Alternative Protection Measure" procedures that can result in increased efficiency without compromising the safety of the operation. This exception is also referred to as the "minor servicing exception." Designed for machine tasks that demand frequent repetitive access, i.e., clearing a jam on a conveyor or a minor tool change, Alternative Measures do not require that power sources be completely cut off. Examples of Alternative Methods technology may include key-controlled locks, control switches, interlocked guards, remote devices and disconnects. It also can mean locking out just a section of a piece of equipment, rather than the entire machine. Implementing alternative procedures to ensure equivalent protection for specific tasks is enhancing productivity without endangering employees. But those procedures -- and their benefits -- come with strings attached, requiring a thorough understanding of the latest OSHA and ANSI standards.

The Darwinian concept of "adapt or die" is on the mind of every manufacturing executive, especially machine builders who seek to remain vital in a competitive global market. Automation and the Industrial Internet of Things is helping to lower the costs of integrating safeguarding equipment in production machinery such as presses, milling machines, and lathes. Savings are being realized in improved productivity, leaner inventory management and preventive maintenance. For machine builders, including safeguarding is increasingly emerging as a key competitive differentiator, one that is becoming more affordable to offer to their customers.