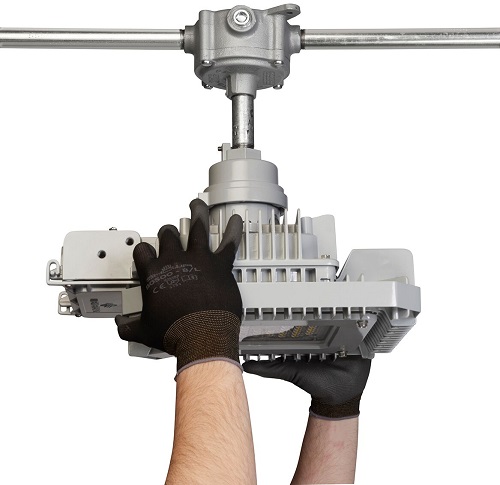 Appleton®, a brand of Emerson and a global supplier of industrial LED lighting, sees 2018 as a pivotal year in LED adoption by industrial companies that have traditionally relied upon HID and fluorescent lighting sources. Appleton has identified five key trends in LED technology that will shape the lighting industry for the coming year.

Only a decade ago, 75 lumens per watt (lm/W) efficacy qualified an LED luminaire as a groundbreaking product. However, this value pales in comparison with new chips offering efficacy as high as 150 lm/W. This means an end-user can actually replace a first-generation LED product and achieve savings of more than 70 percent, not to mention the savings when retrofitting incandescent, fluorescent or HID lighting.

First generation LEDs were designed without a thorough understanding of the electrical environments found in industrial facilities. As a result, these luminaires failed at rates as high as 50 percent two months to two years after installation. Reacting to customers' needs and new ANSI standards, manufacturers are making 6 kV urge protection as a standard feature with 10 kV as an option. The new ANSI standard is 6 kV.

Industrial facility managers choose LED-based solutions not only because these products offer energy efficiency, but also because they deliver an increasingly shorter return-on-investment. Initial investment for an LED retrofit or a new installation will continue to drop in 2018 as the price of luminaries becomes more in-line with HIDs, making payback typically less than three years or, depending on certain factors such as government rebates, as brief as 18 months. New luminaries, such as Appleton® Areamaster LED floodlights, improve ROI by saving companies upwards of 75 percent on energy costs, while virtually eliminating work stoppages for lamp changes and improving productivity by providing uniform, high quality light.

While incandescent lighting suffered from being energy inefficient, it did provide the color and warmth that made workers feel comfortable, whereas LED lighting has been associated with monotone, blue-white light. Light color or "color temperature" is measured in kelvins. The lower the number, the warmer (yellower) the light. End-users now can choose expanded color temperature options in newer LED luminaries, from cool 7000K to warm 3000K to assure the most productive level preferred color of light for any working environment.

Thanks to the versatility of a new generation of LED luminaries no industrial area needs to suffer from poor light levels and uneven uniformity. The Appleton Mercmaster Generation 3 LED luminaries, for example, now comes with secondary optics engineered to create four unique types of light distribution patterns. By adding a variety of light distribution patterns, the luminaire maximizes fixture spacing, while maintaining illumination, minimizing the number of total fixtures needed, and improving uniformity. As a result, overall project cost is dramatically reduced while employee safety, a critical concern in hazardous locations, is improved.

If forecasts of market research firms hit their mark, the global industrial LED lighting market may reach $13 billion (USD) by 2023.* While LED technology is not the only choice - or in some cases even the best choice - it is rapidly becoming the leading choice to replace many of today's energy hungry industrial lighting systems. In the years ahead - as standards become more firm, product lines more established, and customers more conversant with the technology - LED will become a relatively easy choice.
www.masteringled.com