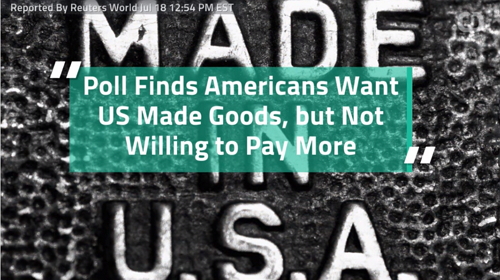 Despite a large number of Americans claiming the importance of supporting US-made goods, they are unwilling to pay a higher price for them. According to a Reuters/Ipsos poll released on Tuesday found 70 percent of Americans think it is “very important” or “somewhat important” to buy U.S.-made products. However, 37 percent said they would refuse to pay more for U.S.-made goods versus imports. Twenty six percent said they would only pay up to 5 percent more to buy American, and 21 percent agreed to pay as much as 10 percent higher prices. The poll also showed that lower-income Americans were the most enthusiastic about buying US goods, despite being the least able to afford higher costs.
http://feeds.reuters.com/~r/reuters/t...
http://www.wochit.com

This video was produced by YT Wochit Business using http://wochit.com